This is the opening line from last Friday’s update….“Today could mark the start of some unsettled weather in the Southern Alps” Well, that was an understatement!!

The last 7 days has seen 3 separate storms hit the Alps. The unsettled period started with 2 southwesterly weather fronts which brought reasonable amounts of snow to the Vialattea. On Wednesday however, the jetstream dropped further south causing a depression to form in the bay of Genoa and then suddenly we were faced with the prospect of a southeasterly storm, the perfect scenario for Sauze.

Sure enough on Wednesday the storm hit bringing with it heavy snow at altitude. Initially the snow line started off around 2000 metres before dropping on Thursday to around 1650 metres.

In the neighbouring resort of Sestriere the weather station on the Banchetta mountain (2480 metres) recorded over 1 metre of snowfall yesterday during a 24 hour period. The graph below shows the steep increase in snow and confirms that there is now over 150 cm of lovely fresh snow. 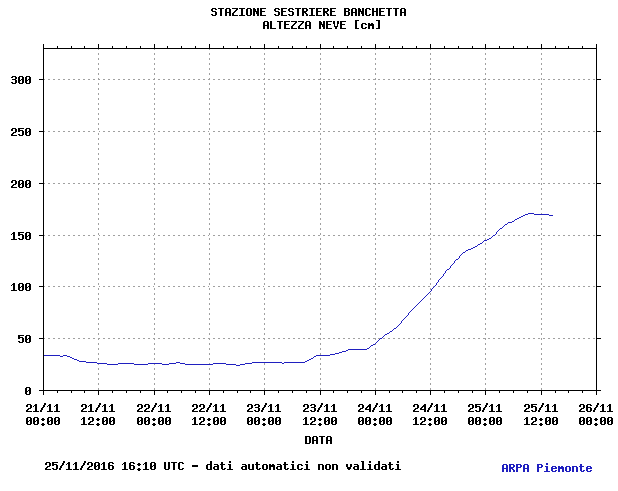 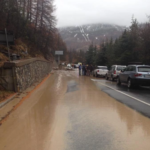 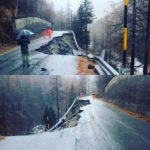 The storm did bring with it major flooding and disruption lower down in the valleys. The road between Oulx and Cesana was temporarily closed due to a landslip whilst a road towards Prali was practically swept away.

Because of the direction of the storms that hit this week, the northern side of the Alps (Lee side) suffered the effects of a warm dry Foehn wind which melted a lot of the good early snow they had at the beginning of November. Just goes to show how an intense snow storm for one part of the Alps can mean disaster for other regions.

The temperature, and therefore the freezing level, will peak on Sunday before getting a lot colder next week. This should hopefully allow the cannons to fire on the lower slopes which will in turn repair some of the damage that the rain caused below 1600 metres.

All this means that we’re still on track for one of the best opening weekends we’ve had for a few years, so if there was any doubt about coming out early this year hopefully you’ve been reassured. See you on the mountain!