Winter’s on its way

With Ski Shows happening across the country this month and the nights well and truly drawing in we’re finally hurtling towards the start of another winter season. I for one cannot wait.

Last week Via Lattea held their annual press conference in Turin which outlined the direction the company is going in along with the all important opening/closing dates and confirmation of the lift pass prices. I often get asked about lift pass prices as early as May but until the official announcement, which always comes in October, I can only speculate.

All the prices are now confirmed and can be seen here. To summaries though, if you’re coming out for a weeks ski then you’ll be pleased to learn that the price has remained the same as last year at €190 (6 day ticket).

The season opens on the 6th December, just 36 days away! (from time of writing). Those looking for a pre Christmas break can expect to pay €130 for a 6 day ticket and €80 for 3 days. The promotional period is from 6th December – 21st December so it’s well worth thinking about getting out for a long weekend to blow the summer cobwebs away. After the 21st December the high season prices kick in.

It’s always good to report investment and development when it comes to the lifts and this season I’m glad to report that Sauze will have an additional lift. I say additional as opposed to new as we are receiving an existing lift which was original installed in SanSicario but has not been operational for the last few winters.

It will start in the general area of Bourget and Pian della Rocca and will terminate where the old Triplex chair finished. I’m a little sketchy on the exact start point but rest assured, on the opening day I’ll be up there taking photos and giving you a full report. For the time being here are some pictures taken in the summer that should provide those who know Sauze with a good idea of its route. 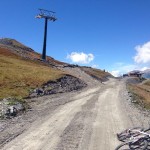 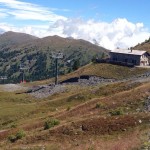 The new onsite messaging feature launched a few weeks ago is proving popular with many of you leaving me messages and asking a wide variety of questions. I try to answer within 24 hours so if you need to ask anything at all then just click on the blue message button found at the bottom of every age.

Now for the really good news, we have snow forecast for next week! Always good to hear that! Hopefully we’ll see it snowing Tuesday and Wednesday so keep an eye on the webcams. You’ll certainly hear me shouting about it if the forecast holds true.

For now don’t forget that equipment rental, ski school and airport transfers can all be pre booked online via the site.

Here’s to another great season in Sauze d’Oulx!