You may have noticed that the site is looking a little different. A plus side to that is a nice new clean look, the downside is that I lost a couple of blog posts in the transition so apologies for the gap between this one and the last.

On to matters of the heart, snow! Since the last post we have seen a change in fortunes as far as the snow is concerned. Last week saw a lovely low pressure system come in over Sauze d’Oulx which provided us with a relatively decent snowfall. Still not officially the first big dump of the season but a mighty good effort none the less.

Friday 16th December saw the heaviest snow which continued into Saturday and whilst it is hard to say for sure how many centimetres fell, on Friday alone in the village at least 20cm came down with more being reported up top.

We had a little break then until yesterday when I woke up to snow falling again, nice big flakes. Up the mountain was great, the sort of day when even on piste is off piste. It was the first day on the mountain for many people as the first holiday makers took to the slopes. Probably not the best day to start your skiing career but if you don’t mind a little snow in your face then all’s good. After all surely it’s only the Italians who are fair weather skiers?

One thing that is plaguing us at the moment is wind. In the afternoon yesterday they shut the chair lift up to the top of Fraiteve due to high wind, effectively cutting Sauze d’Oulx off from Sestriere and SanSicario. The wind continues to play havoc today.

Good news is that many of the lower slopes are getting all the attention required to get them open before the end of the week. If the wind does continue then at least these tree lined runs should provide sheltered skiing.

Last Thursday evening an old local boy was heard to say ‘the drains are smelling, snows on the way’ Now I’m not one to mock when the locals come out with strange sayings like that, after all they live and breath the mountains but this did take me by surprise. Thinking about though a change in the atmospheric pressure would indeed have the effect of pushing the air from the drains. Sure enough within a few hours the snow had arrived. If you arrive and there’s a rather dubious odour, rejoice, snow could well be on the way.

Official snow depth: 80cm on the lower slopes and 100cm on the upper slopes. 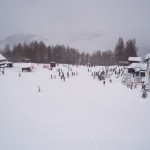 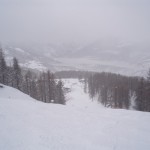 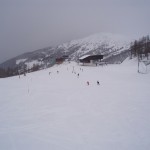 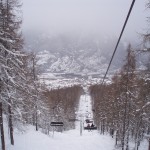