Monday and Tuesday of this week brought snow glorious snow. Andorra, France and the rest of the Alps seemed to be getting it all last week whilst Sauze bathed in glorious sun. Not ashamed to say that snow jealousy was setting in. Thankfully our patience was rewarded and by Monday night it was coming down very nicely.

Visibility was bad effecting what was open but by Wednesday the weather had changed and skiing the Milky Way was back on. The village was submerged beneath a bank of cloud but above 1750mt the sun was shining and the snow was deep!

Wednesday morning saw me waiting patiently at the bottom of the lift itching to claim first tracks. The on piste conditions were the best that I had experienced all season. The avalanche risk had gone up to 4, one below the highest level so picking where you decide to leave the piste was somewhat important.

The helicopter was out first thing dropping explosives into the high risk areas but despite watching and hoping to see something spectacular, nothing happened. Better safe than sorry though.

The official snow depths have the upper slopes at 160cm and the lower slopes at 80cm. All major links are open and whilst I pen this I’m happy to report that it’s snowing again. The forecast says that we’ll have snow today and tomorrow and then for it to return Monday. After that the week should be fairly sunny and cold, just what we want!

Just a word of warning though, it is carnival week in Italy next week so Monday and Tuesday could be rather busy. Hopefully it’ll quieten down from Wednesday onwards. 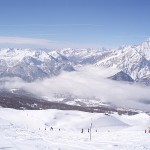 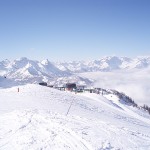