No hat for Pat

The premature ‘heat wave’that was forecast for the UK this week certainly found it’s way to the Italian alps yesterday. Clear blue skies and temperatures in double figures were the order of the day. I even felt confident leaving my hat behind for the first time this winter.

The snow yesterday though was fantastic. The warmer weather began to release the pistes from their icy grip and skiing was good all over the mountain. Towards the end of the day the lower slopes showed signs of being a tad soft but over all we had great conditions everywhere. The obvious question is how long can we sustain the higher temperatures before things start getting a little patchy?

Today is very much the same and the warmer air is due to be with us over the weekend and into the beginning of next week. The forecast does have snow coming in at the end of next week and the temperature dropping to seasonal averages but for now lets just enjoy the spring like conditions.

Historically the end of the season has seen some good late snow and as we’re still waiting for the first big dump of this season, I’m confident that powder days are just waiting in the wings ready to make the smiles on peoples faces even bigger than they were yesterday.

Tuesday was Carnevalle in Italy so this week has seen the slopes a little busier than normal. That said the queuing was still fairly mediocre compared to some resorts in France that I’ve been to during the holidays. Monday was probably the worse and I did have one of those days when a couple of runs was enough and an early shower was the order of the day. Next week we should have the mountain to ourselves again.

We have The Big Snow Festival coming out to Sauze on the 25th March for 1 week which should be a great end to the season. We’ve been spoilt this season with great live music from various resident line ups. Yesterday The Pistey Boys played their first mountain gig at Chalet Molino. Blue skies, great snow, sun cream and live music until the sun goes down is a great way to spend the day. If you’re out next week then, weather permitting, they’ll be playing again so keep your eyes out for the posters, Oh and pack high factor sun cream. 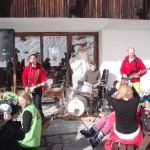 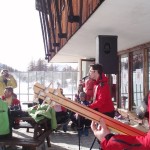 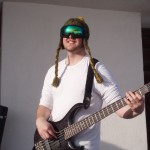 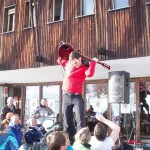